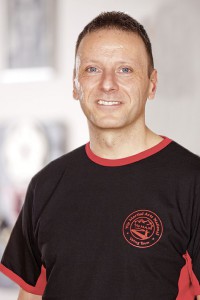 Already in his childhood Mario De Luca became interested in various types of martial arts. At an early age he gained practical training experience in the areas of taekwondo, Thai boxing and karate.
At the end of the 80s he first came into contact with Leung Ting Wing Tsun (WT) and Escrima (Philippine stick fight). These types of martial arts inspired him in such a way that he wanted to open his own martial arts school and to become Sifu (father/ tutor). At the age of 15, Mario De Luca started to train Wing Tsun on a regular basis. His first Wing Tsun instructor was Sihing (older brother-tutor) Franz-J. Kleinjans.

Mario De Luca was so much inspired by his practical skills and human manner that he never missed training. Even today, Mario De Luca still holds good memories of him.

In 1997, Sifu Mario De Luca met master Yip Chun from Hong Kong. He is the oldest son of the legendary Wing Tsun Grand Master Yip Man.
Sifu Mario De Luca completed a seminar with him and was given the opportunity to be instructed in the traditional wooden dummy techniques (Mok Yan Chon Fat) by the son of the Yip Man.

In the year 2000 at Schloß Langenzell, Sifu Mario De Luca received the trainer’s certificate of the EWTO.

At the end of 2000, Sifu Mario De Luca was awarded the EWTO – trainer 1 certificate.

Since 2001, Mario De Luca gives full-time lessons in Wing Tsun, Escrima and Qigong five days a week at his martial arts academy together with his team of instructors, among them also his father.

Also in 2001, various masters met in Hockenheim conducting seminars in their particular kind of martial arts. Sifu Mario De Luca participated in workshops of Geoff Thompson, a well-known self-defence expert who was one of the first to recognise the psychological and sociological factors of self-defence. Furthermore, he attended seminars of Sunthus Supasturpong, one of the five top Muai Thai instructors in Thailand. In addition, Sifu Mario De Luca had the pleasure to experience special guest Hawkins Cheung who was also a Yip Man student and class-mate of Bruce Lee.

In the years 2002 and 2003 he visited several private tutorials given by the Chinese Wing Tsung Grand Master Leung Ting.

In 2004, he followed up with seminars on the subjects of „The history of the Wing Tsun system“ and „Chinese confidential societies and Kung Fu“ also held by Grand Master Kernspecht.

In 2006, he was selected by his former teacher Sifu H. Remmel to become the coordinator for the area of North Rhine-Westphalia on the left side of the river Rhine and Bonn for Wing Tsun, Escrima and Qigong.

In 2009, Sifu Mario De Luca participated in the seminar “Doctrine of Jeet Kune Do” under seminar leader Sifu Tommy Carruthers.

In 2010, Sifu Mario De Luca flew to Brazil where he took part in a “seminar marathon”. In 15 days he finished 28 seminars which led him throughout the whole country. During his Brazil marathon, Sifu Mario De Luca has helped to train the Brazilian police force in self-defence techniques.

From 1999 to 2011, Sifu Mario De Luca took countless private lessons with his former tutor who instructed him in unarmed Wing Tsun including the long pole form Luk Dim Boon Kwan.

In 2012, Sifu Mario De Luca founded his own association, the Yip M.A.N. = Yip Martial Arts National together with his family and friends.

At regular intervals, Sifu Mario De Luca and his instructor team organise summer festivals at his martial arts academy for a beneficent purpose.

As a Yip M.A.N. Wing Tsun instructor Sifu Mario De Luca considers it his duty to further refine his knowledge and abilities. His skill and knowledge should be passed on to his students in a non-constraining and competent manner.

As Sifu it is important to him to assist his students with words and deeds in an open- minded fashion.

The execution of your Wing Tsun movement is a mirror of your soul.